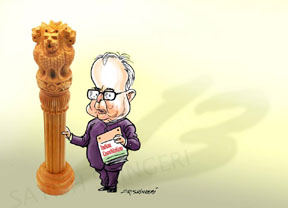 Dr Satish Sringeri who signed as ‘SATISH SRINGERI’ was born on 1st May 1968 at Sringeri as the son of Sringeshwara Rao and Yashodha. The gifted caricaturist from Karnataka expired in September 2012 after a brief illness. He leaves behind wife, Vasumathi and son Aniruddh. It was his brother Raghupathi Sringeri, a cartoonist who discovered this cartoon drawn by Satish for us and mailed to us.
Web: http://sringericartoons.blogspot.in/
Posted by Kerala Cartoon Academy at 9:32 PM